Looks like another bit has dropped off a Tetrap! 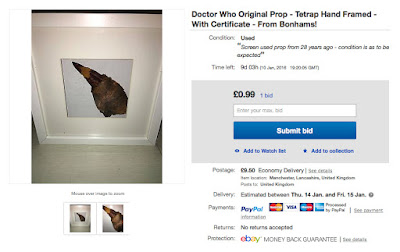 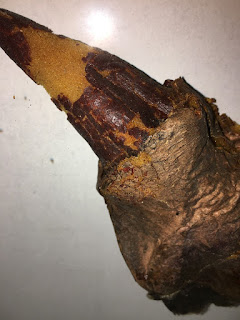 This is an amazing opportunity

There were just three of these tetrap costumes made for the 1987 story Time And The Rani.

As with many costumes of the day, they have deteriorated. This is from one of these original screen used costumes sold in the famous bonhams auction.

I have seen small pieces of tetrap skin sell for £50-100 over the years on ebay but never such a large piece - this digit is in great condition and has been framed in a box frame.

It is supplied with a copy of the letter of authenticity and is s once in a lifetime auction! 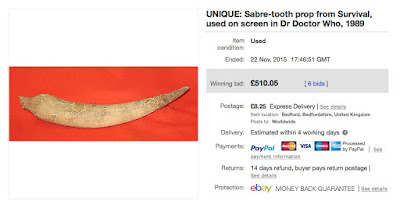 This is a prop sabre-tooth knife, used by Mitch in Survival, the final story of classic Doctor Who, in 1989. It's a lightweight version, as it had to be used as a weapon that wouldn't hurt anyone. It is the prop that appeared on screen.

It's been donated to us by Mike Tucker, the BAFTA award winning special effects designer, who's worked on Doctor Who since the 1980s. We're extremely grateful to Mr Tucker for his most generous gift.
Posted by Steven Ricks Tailoring at 16:20