Doesn’t time fly!
It doesn’t seem that long since the last Bonhams auction, and the next in December is soon upon us.

The online catalogue has been posted and there 23 Doctor Who items, mainly from the Tennant era, but there are a few from Matt’s first season as The Doctor.

Here is the only lot relating to the Seventh Doctor 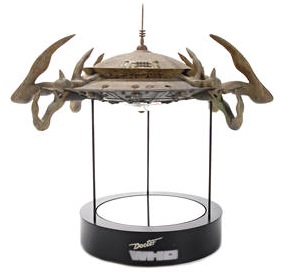 Lot 154a
Dr. Who: an original spaceship model from ‘Battlefield’, broadcast 13th September 1989,well-detailed, removable top section with internal electric wiring, on stand, with certificate of authenticity approximately 51cm (20in) diameter
Estimate: £4,500 − 5,000
Sold for £5,000
Footnote:
The ship is classed as an ‘Organic Spaceship’ in this episode. It lies on the bottom of Lake Vortigern containing the body of King Arthur, apparently in suspended animation, and his sword Excalibur. The ship is made from different materials including metal, resin and fibreglass. The ship was used for underwater shots - the ‘blow hole’ where a stream of bubbles emanates at one point is clearly visible. This can be operated by a switch. This was one of two models made, the other model was blown up.
Posted by Steven Ricks Tailoring at 14:39 No comments: