This is a curious item, mainly cos it just doesn’t seem to want to sell!

It’s been listed a number of times, at progressively reduced prices. 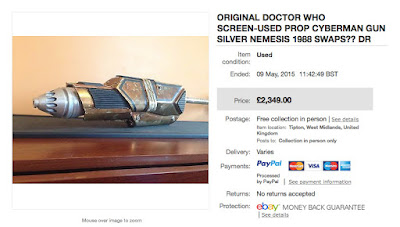 This is the last time I shall be reducing the price of this item. I would rather keep it than reduce it any further :-)

Here we have a real piece of Doctor Who history, an original, screen-used Cyberman gun from the 1988, 25th anniversary story, Silver Nemesis.

This prop is really quite something. It is one of only 2 or 3 complete Cyber-guns that remain out of the original 8 that were made for the story. It is also very rare to see an original Nemesis prop that hasn't been re-sprayed (most remaining Nemesis props were re-sprayed for use in museums and exhibitions etc.) This prop is completely 'as it was'. I'm sure everyone knows about the golden brown colouring of the original Nemesis props, but if not, here goes:

All original Nemesis props (Cyberman helmets, chest-plates and guns) were chrome-plated. During filming, they were sprayed with a lacquer, to make them extra shiny on camera. This lacquer reacted with the chrome, and changed the colour of the props into a beautiful golden colour.

The gun is in absolutely mint condition, no damage whatsoever. Absolutely amazing condition for a prop that is almost 26 years old.

I acquired this gun directly from Jamie Smyth, arguably the biggest dealer of original Doctor Who props in the world. Before me, Jamie obtained the gun from a chap quite well known in the Doctor Who fanbase, Chris Balcombe. Chris also had this gun checked over by Mike Tucker, who made all the original guns for the BBC back in1988.

The gun also comes with a custom-made display case which I had specially made for the gun. This is an absolutely cracking prop, it is very well made out of various materials including steel and fibre glass. It is very very sturdy, not a feeble piece of rubbish which is all too synonymous with original Doctor Who props. The gun consists of all it's original parts, including the original screws, which have also been chromed!

I've tried to keep it as simple as possible but if you do have any questions, please don't hesitate to message me.

READ MORE
Posted by Steven Ricks Tailoring at 21:25 No comments: