Who Cares? I don’t believe it!

This weekend was the latest event organised by Tenth Planet Events.

I've been regularly attending their conventions and signing days over the past couple of years, and thoroughly enjoyed them all. Always well organised, relaxed and well attended - I keep an eye on what's next in their calendar. 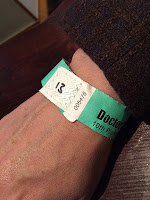 The convention this weekend was a charity fundraiser in aid of Denville Hall, a retirement home for members of the entertainment profession, part run by none other than Lalla Ward herself. A previous event for the same cause sold out before I got myself fired up to go, so I booked this one nice and early, snagging myself the unenviable ticket number 13!

The way things have panned out I've ended up with a big, last minute rush job to remake some costumes for a National Theatre stage production that's due to open in less than a week. More on that later. So having already worked to the small hours I dashed over to Slough for the convention as I really didn't want to miss the chance of meeting the guests due to attend.

Sadly it would seem this event has been plagued by a spate of last minute cancellations. I was hoping to meet the Meldrews (Richard Wilson and Anette Crosbie themselves) but neither are now attending - so I'll avoid the obvious 'I don't believe it!' puns which were flying around all day after the news broke.
On top of this William Russell and Janet Fielding have both had to drop out. 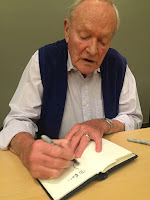 Replacing them has been Hammer Horror damsel Madeline Smith and iconic villainous actor Julian Glover. He's a very welcome signature in my book, given the wealth of productions he's been involved from Doctor Who to James Bond and Star Wars.

Due to the fairly steep ticket price of £100, attendance was distinctly down, with only 80 convention goers turning up for the chance to meet the remaining guests.

Of the dozen or so guests that are coming, I only need a quarter for my autograph book, as I've met the rest or they are not Doctor Who names.

First up was a group photoshoot with all attending guests - well those who had turned up at this point. I'm not big into endless individual photos with actors, aside from a few special stand-out opportunities (the Meldrews would have been one), but a shot with a dozen makes it a worthy memento of the days event.

Now that was over it was time to hunt a few autographs. 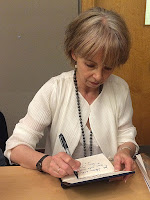 Companions Carole Ann Ford, and Lalla Ward are already in my book, but I took the chance to get Lalla to sign opposite my Tom Baker page, joining Louise Jamison and John Leeson.

I took the chance to get Lalla's husband Richard Dawkins, who as well as being a renowned scientist, had a cameo appearance in The Stolen Earth in 2008, despite not being a Doctor Who fan!

Sylvester McCoy, John Leeson, Richard Franklin and Garrick Hagon are all in my book from previous events ranging from Gallifrey One in LA to Timey Wimey in Brighton. 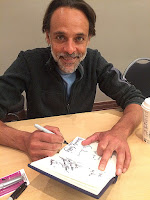 Alexander Siddig and Jenny Hanley were of less interest, but we're absolutely charming to speak to, so I got Alex since he was in Torchwood. 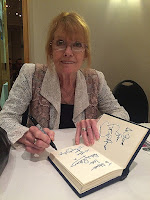 This left Claire Bloom, Deborah Watling and Simon Fisher Becker, all of whom I needed.
Getting Deborah completes my trio of all Patrick Troughton's companions, which alongside my complete Peter Davison page makes my book feel like it's filling up at last. 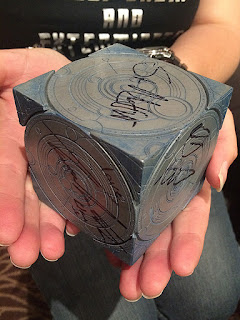 Once we had all obtained our autographs, it was time for a charity auction in aid of Denville Hall. One of the star items was a TARDIS siege cube, signed by Perter Capaldi, Jenna Coleman and Steven Moffat, who donated it having sat on his desk. It sold for £500!

There were a lot of Big Finish CDs on offer, as well as signed photos and the occasional script.

The afternoon was given over to various panels and interview sessions, but given the work I have on at home I decided to make a sly exit and head back to finish the job in hand.

The job I had been asked to do was to rework two curious shaped fitted jackets made in Lycra and neoprene - not the best fabrics to tailor such garments from. 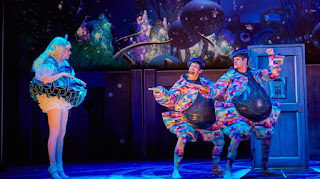 They are for Tweedle Dee and Teeedle Dum in Damon Albarn's reimagining of Alice In Wonderland, called Wonder.land. It's all very high tech - if I say the concept is the rabbit hole is now the Internet, you'll get the idea. 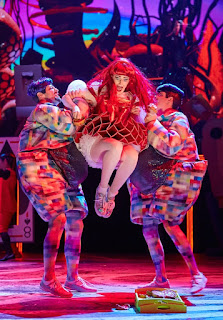 The jackets had gone through some design changes, and there was less that 48 hours for me to knock them into shape ready for the opening of the show at Manchester's Arts festival next weekend.

Suffice to say it was hard work, but the costumes were ready in time - just!

A few days later I was amused to see a report on Wonder.land on BBC Breakfast, as well as follow up stories as the production opened to mixed reviews.


BBC News - Damon Albarn's musical will be 'a little controversial' 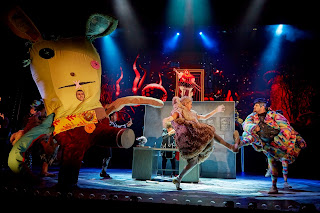 After a two week run in Manchester, it will transfer to the Olivier theatre on the South Bank in November, by which time I imagine they'll iron out a few of the problems they had.

Posted by Steven Ricks Tailoring at 22:17 No comments:

This looks familiar!
I’m guessing whoever bought this back in June of 2014 has either got bored of it or finds it gets in the way!

Time and the Rani
The Time Brain 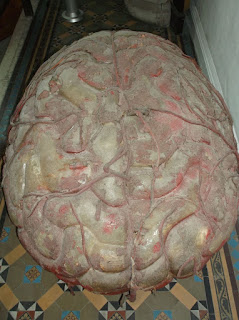 An original prop from the 2010 Dr Who - The auction at Bonhams. Comes in the tired condition alot of the props were like when sold. Has the bulb put into it for the exhibition in Llangollen then later Blackpool.

This is what the auction has to say:
Time and the Rani, September 1987
The Time Brain,
of moulded and painted fibreglass, with applied latex veins, having internal wiring, length approximately 50 inches (127cm).

Posted by Steven Ricks Tailoring at 22:29 No comments: