This weekend I was off to sunny Slough again for the sixth Big Finish Day.


Organised by Tenth Planet Events, it’s a format of convention I’ve increasing enjoyed and been finding myself drawn to. So much so I’ve booked myself up for most of their events for pretty much the rest of the year!

The main draw for me today has been Sylvester McCoy who I have a reserved page for in my autograph book, opposite Sophie Aldred who I got at the recent Timey Wimey event in Brighton. 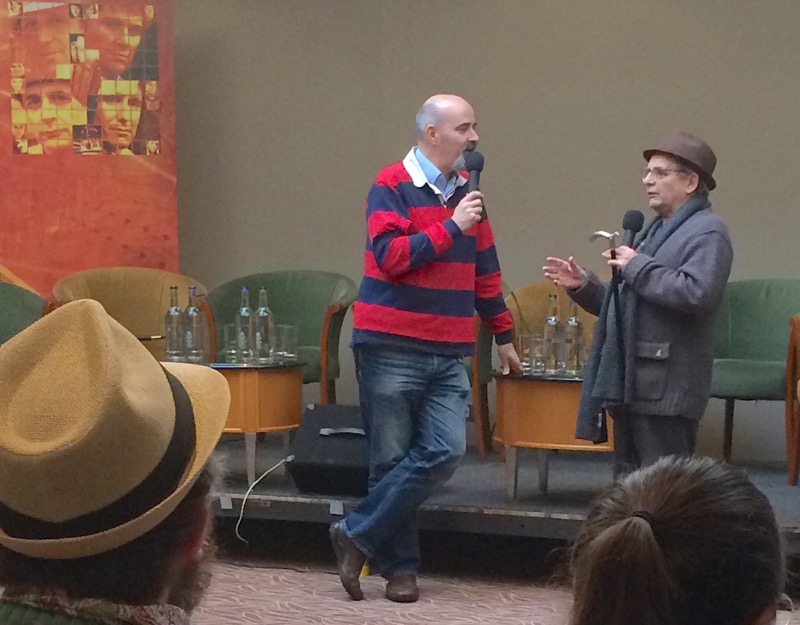 The day kicked off with Sylvester’s stage talk, hosted by Dalek voice Nicolas Briggs. After introducing the guest, Nicolas said “shall we sit down?” and after considering for a second or two, Sylvester pointedly said “No!” So the whole talk was done standing and moving around the audience, something I’ve seen him do before (in a motorised scooter back at the Time Quest 2 event in early 2010!)

Sylvester said, “You know, Peter Jackson owns one of my original Doctor Who costumes. He directed The Hobbit, y’know. Did I mention that I’m in The Hobbit?”, thus casually dropping it into conversation.

“You wait for a Hollywood film, and three come along at once!”, recalling his frustration in finding out he had been upstaged by a variety of CGI characters he had little knowledge of whilst filming. 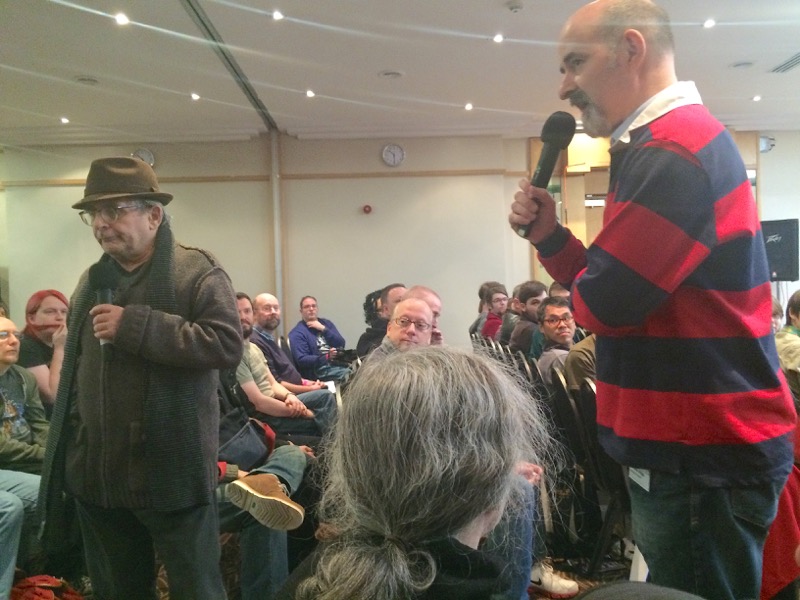 After a relatively brief exchange, the questions were quickly opened to the floor, and it was Sylvester who took the microphone to the fans. You could see he was in his element.

Someone asked about Sylvester's meeting with Matt Smith for the anniversary. To paraphrase his reply, he described him as an "Afghan Hound puppy! He comes bounding up to you all excited, his tail waging and he's all over you, shaking your hand and licking your face. He was delightful!" 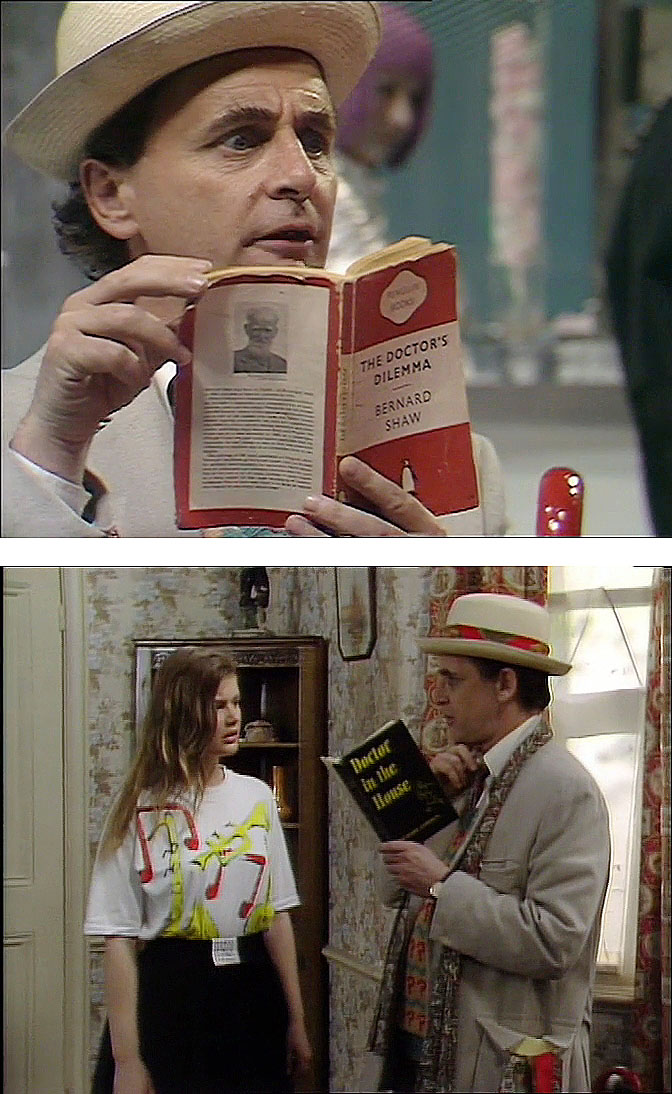 Next up was my photocall with Sylvester, for which I had brought along two books to use as props. In Dragonfire The Doctor is seen browsing Doctor’s Dilemma by Bernard Shaw, and in Remembrance Of The Daleks he is reading Doctor In The House, by Richard Gordon.

He's always enormous game, so I happily took the book from me when I offered it to him, asking if they were the original screen used - so he clearly remembered having them in the series. 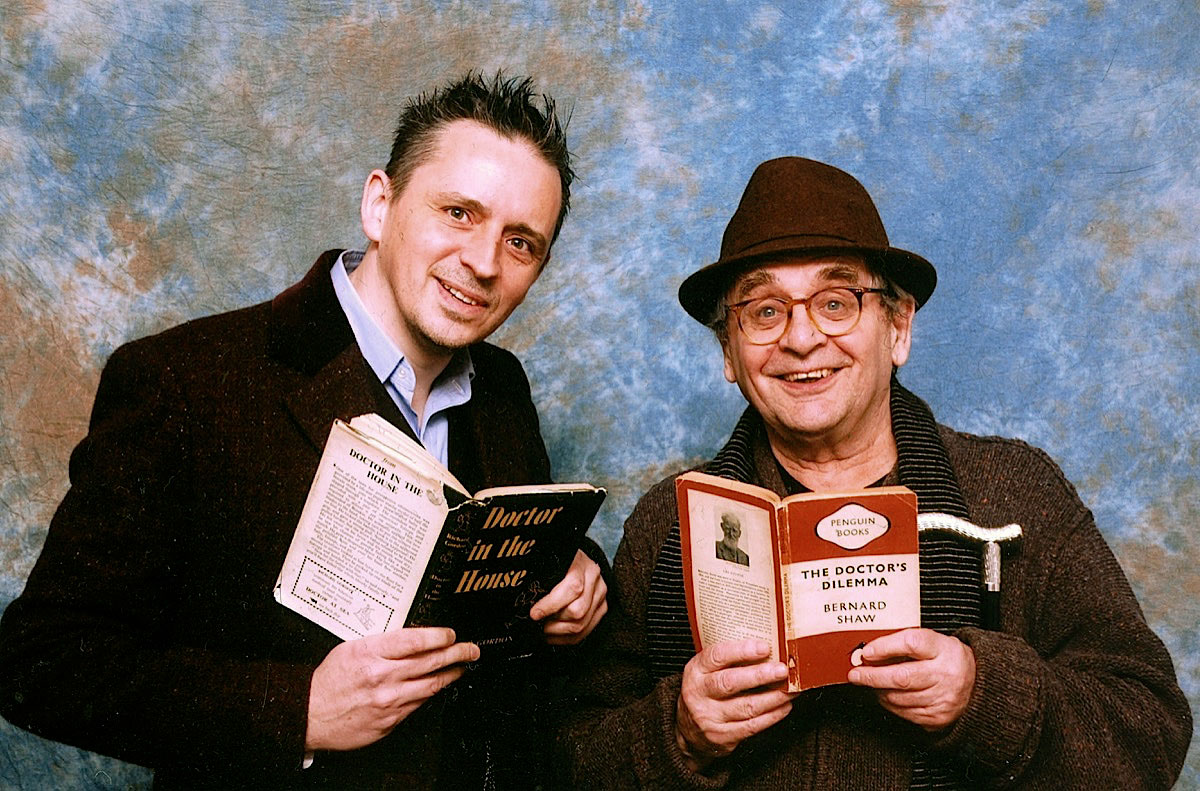 In a room closely was Ellis George, the girl who played Courtney Woods in several episodes of the latest series. She didn’t have much of a queue, so I took the chance to chat to her a bit before moving on. She was quite excited to have got the part in Doctor Who, and beyond her first read through which she found intimidating by the number of people in the room, Ellis thoroughly enjoyed her time on the show. 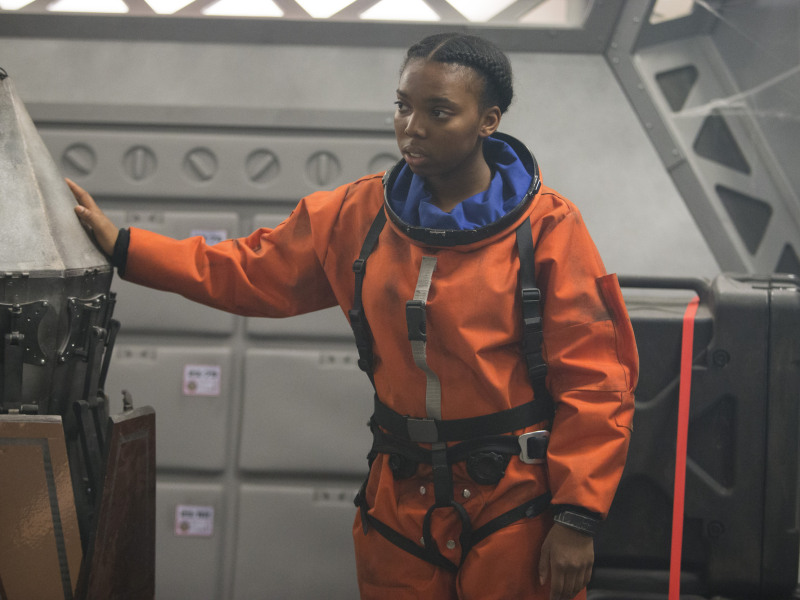 She revealed that the intention was for her to only appear in the brief flashback scene in Deep Breath, but they kept asking her back to do more and more scenes, until finally she featured extensively in Kill The Moon.

This was one of her first conventions, and she's looking forward to doing more in future. Her eyes lit up when I told her about Gallifrey One in LA. She would like the organisers to know she awaits their call....

UPDATE
I don’t think it was anything to do with me, but four days after the event, Ellis was announced as a guest at Gallifrey One - in LOS ANGELES! 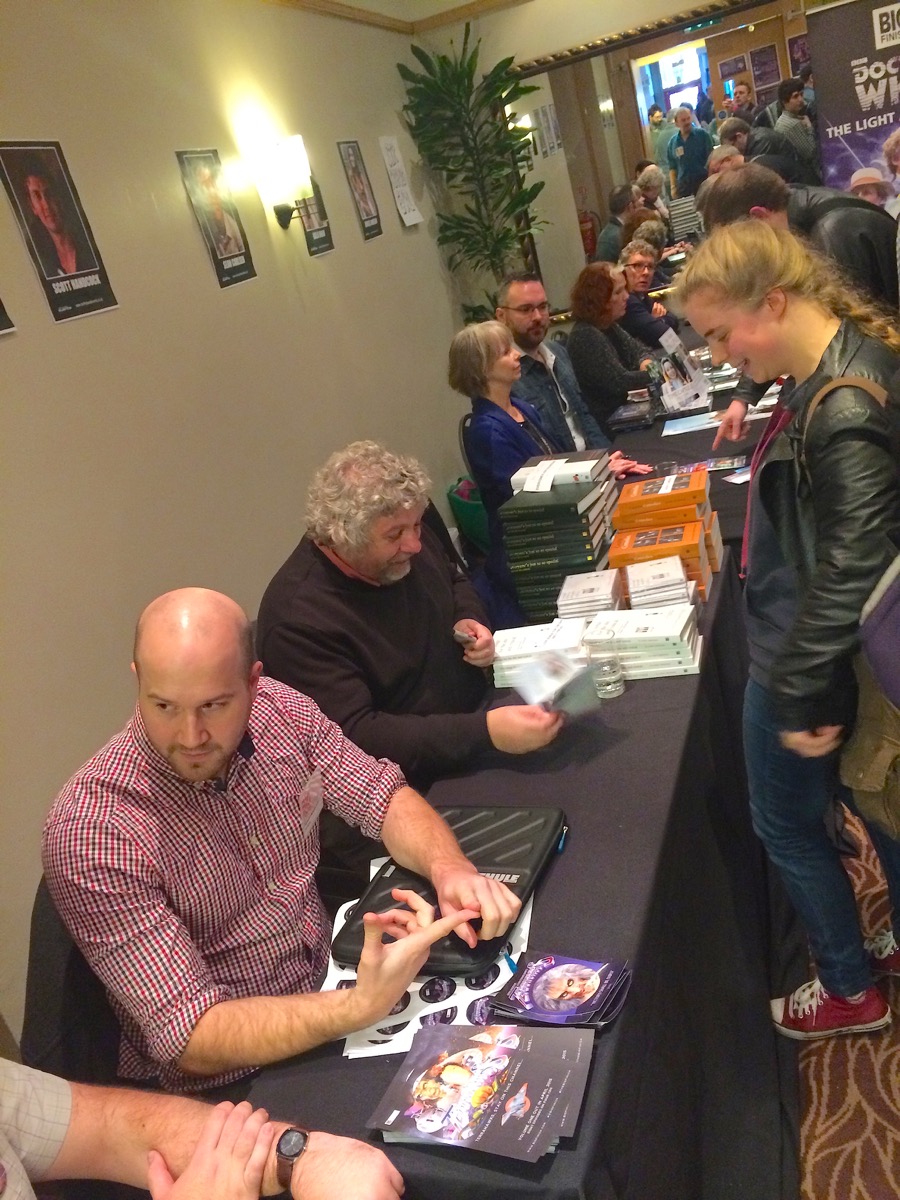 On the way back to the main hall for the next panel, I caught a couple of autographs I needed for my book. Lalla Ward and Dalek writer Rob Sherman (who I needed) were on hand for free signings, alongside Louise Jameison and Jamie Anderson (who I had or did not really want!).

Rob drew me a cute (but in his own words, “shit”) cartoon of a Dalek!

It’s a funny arrangement: if the guest is through Tenth Planet, then you pay per signature; if they are there as guests of Big Finish, they are free and happy to sign as many as you want.

Also on hand for autographs was Mike Tucker, one of a handful of crew who worked on both the classic and new series.

I ducked into the Big Finish Time Share Sales Pitch - I mean panel - where they talked about some of the upcoming additional ranges they are adding to their catalogue in 2015.

Amongst them is The Prisoner, something which I think they will struggle to match the depths and subtly of the original, given that there is virtually no surviving principle cast player available. 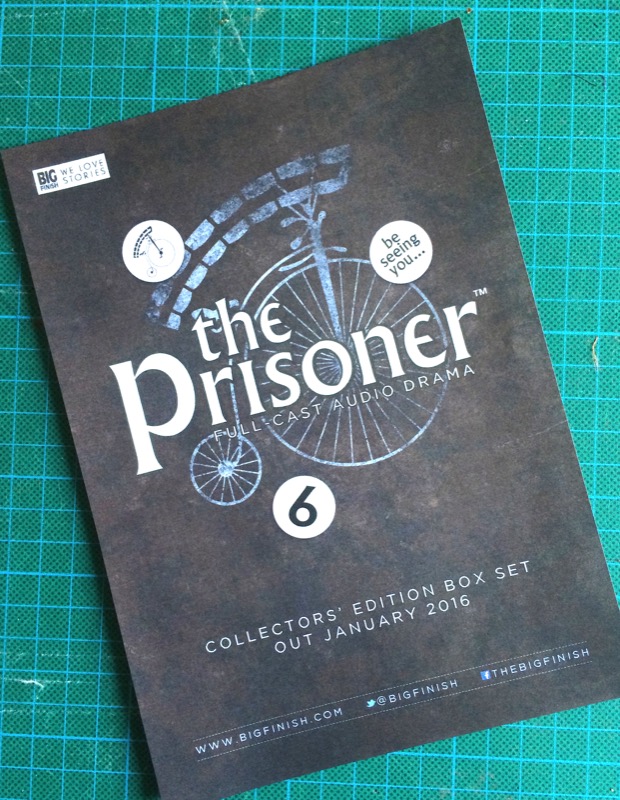 I fear it becoming one of these ‘reimagining’ reboots we have so extensively these days. The Prisoner is a show that has a visible plot, but is driven by an ethos below the radar which can’t easily be captured. I wish them luck.
For those keen for news - there isn’t any at the moment. It is being written by Nicolas Briggs and no casting has been finalised as yet - so it’s early days.

I left just before the end so I could join the queue for a photocall with all three of the Fifth Doctor companions, Janet Fielding, Sarah Sutton and Matthew Waterhouse. Janet commented to me that I must have dozens of these photos now - I only have a few really, and this was the first with the three of them together. Pity Peter wasn’t there too. 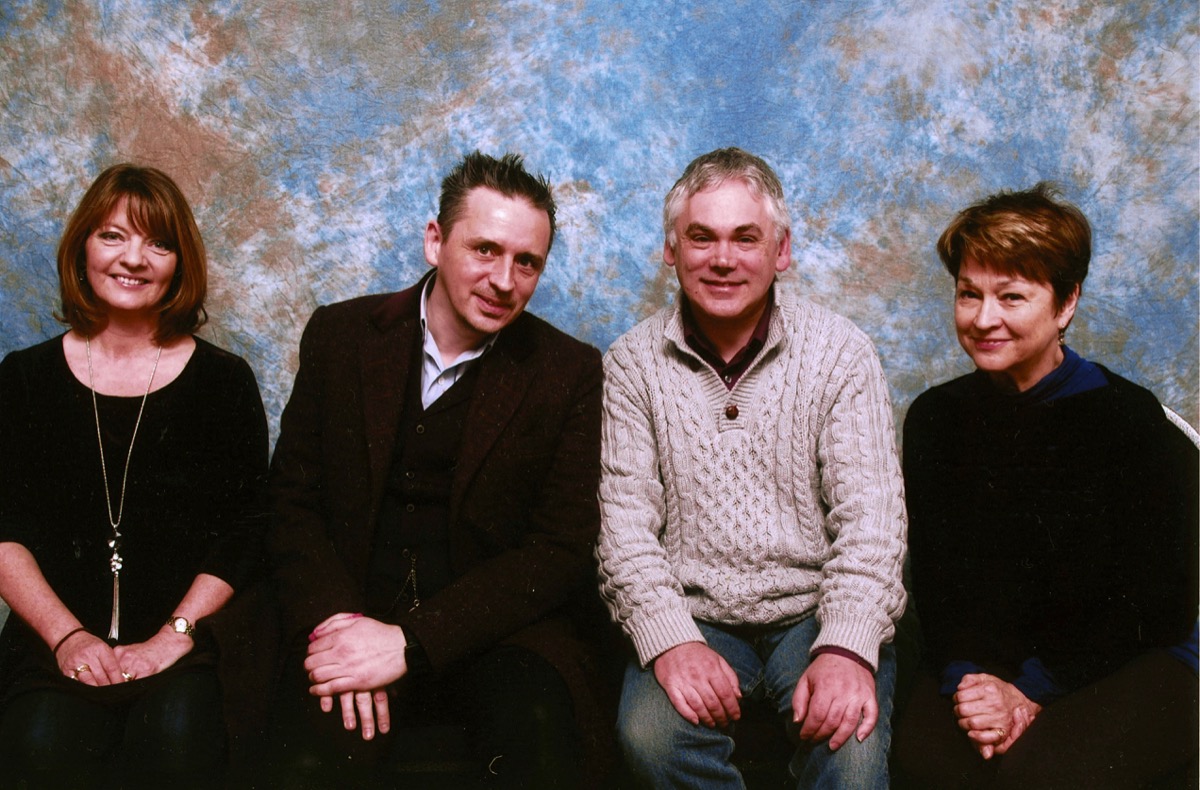 Back in the main hall the Blake's Seven panel was well underway, with Jan Chappell as the headline guest. It as interesting to hear how they put these things together, often with only half the cast due to budgetary constraints. A couple of the cast aren't involved with the range, so they have to be written around too. 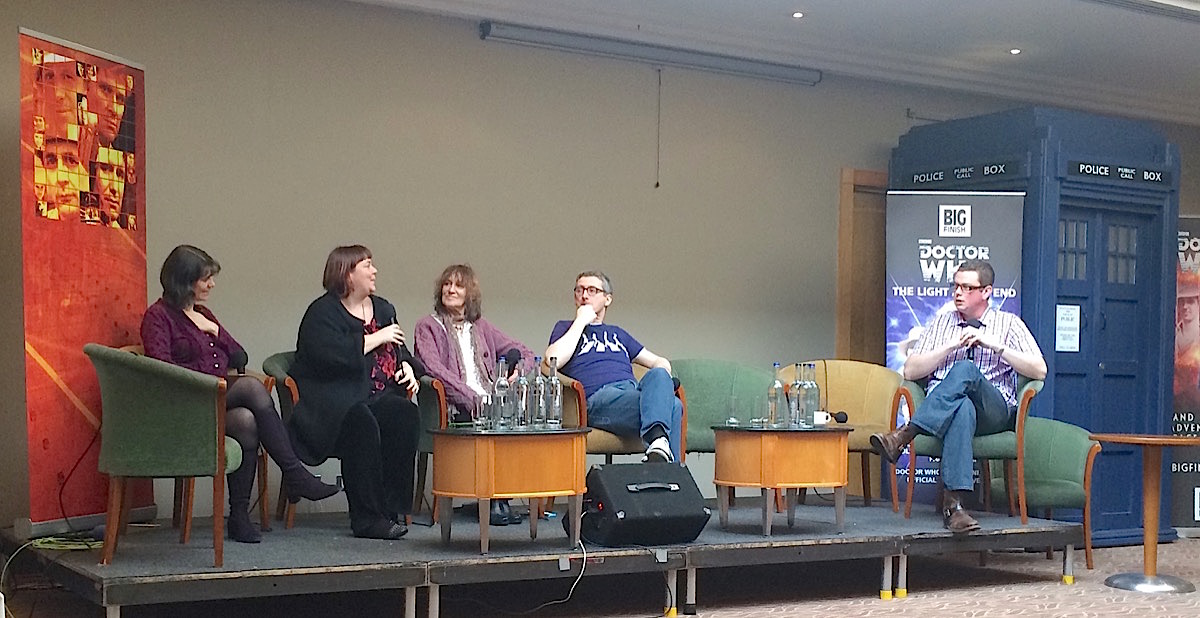 After seeing Jan at a recent Blake’s Seven retrospective at the BFI, she bemoaned how her character had enormous promise when she joined, but was often relegated to teleport duties on The Liberator, which the men went on away missions. This would often mean a location shoot with an overnight stay at a hotel, thus missing out on a break from the studio grind.
Big Finish have given her the chance to explore the character, and go on away missions, abet still without the need of a hotel stay. Oh well. 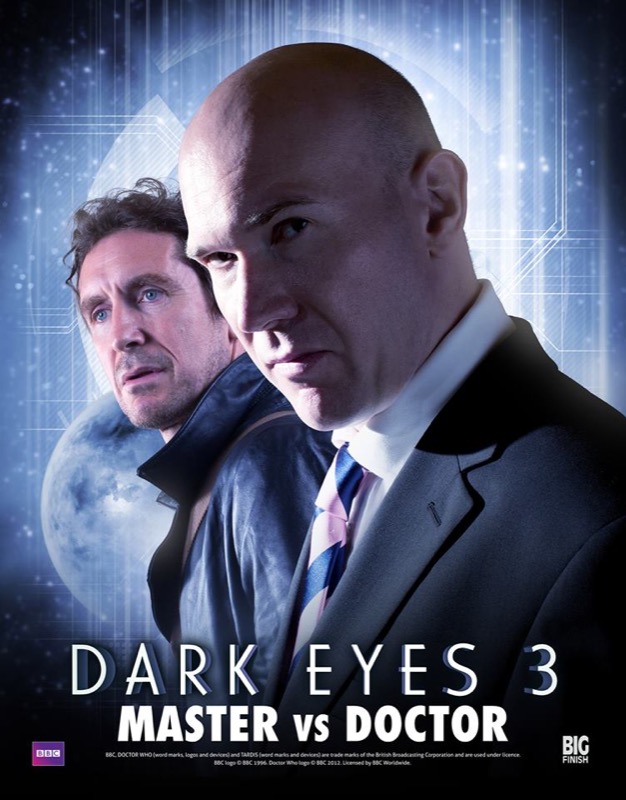 I then watch most of the Meet The Actors panel, where Siobhan Redmond, Alex McQueen, Tim Treloar and David Sibley waxed lyrical about recording their Big Finish productions. 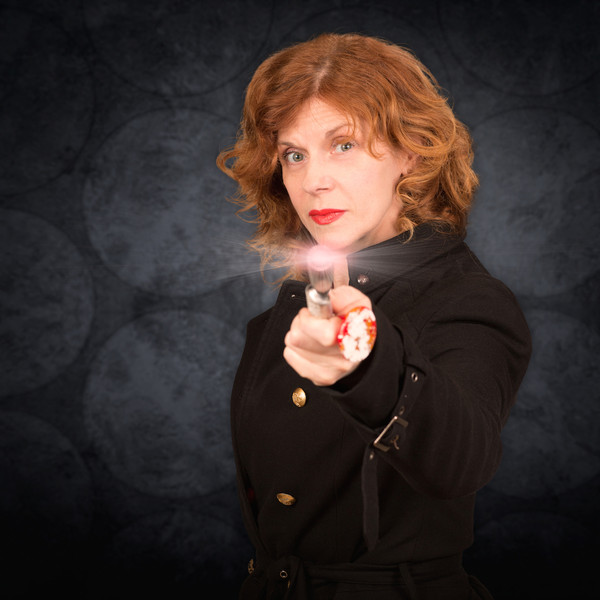 Siobhan and Alex are notable for playing The Rani (in The Rani Elite) and The Master (in Dark Eyes 3) respectively, and Tim Treloar took up the challenge of recreating the distinctive tones of Jon Pertwee alongside Katy Manning and Richard Franklin.

This wasn’t the most popular panel, but I had the chance to seat hop down to the front row and remain in my seat for the next panel featuring the Fifth Doctor companions.

As it happened, the panel was hosted by Simon Guerrier, who a couple of months back interviewed me for Doctor Who Magazine.
He had the unenviable job of wrangling Sarah Sutton, Matthew Waterhouse, and most of all Janet Fielding. I'm sure half of what is said is an act, but sometimes Matthew so richly deserves the ridicule he receives, based purely on his own comments at panels such as this.

Before Simon open the questions to the floor, he offered a prize for the best question. 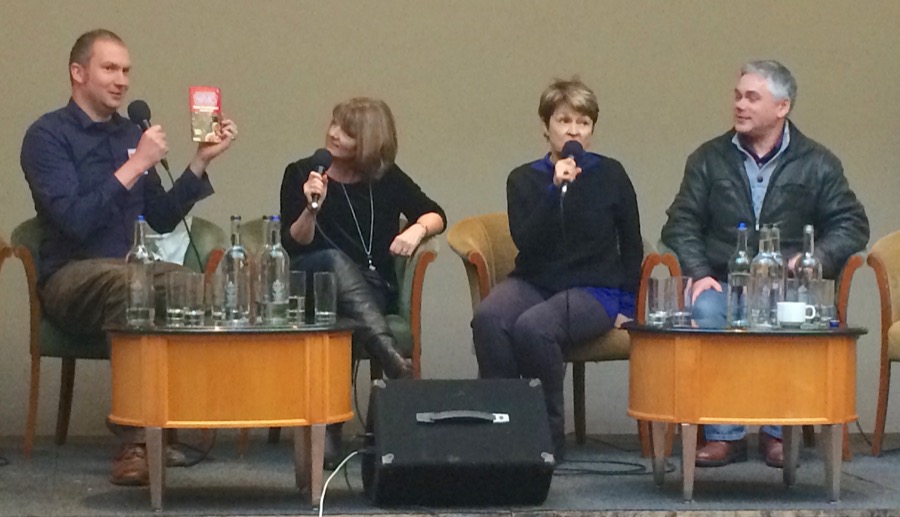 I put my hand up and eventually I got to ask Janet if she would like to see Big Finish explore what happened to Tegan between Time Flight and Arc Of Infinity. She ‘left’ at the end of season 19, only to return at the start of the following season - although she did not skip an episode, we actually get no sense of how much time elapsed between the two adventures, leaving it open for Tegan to have had her own adventures - I’m seeing a multi-disc box set here. 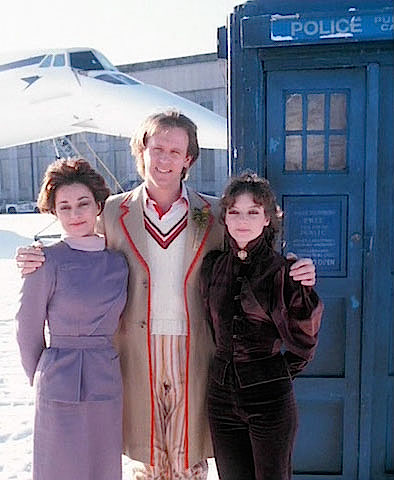 She lit up at the idea and said at least it would mean not having to work with Matthew!
Janet then took me aback a bit by pointing at me and saying “Great question, Steve!” She knew my name!!

Questions continued and another member of the audience asked if Janet would do the further adventures of Tegan, after she was left wearing a black leather mini skirt and high heal in a deserted dock in 1980s London. All manner of innuendo followed - after all Tegan would have had no money and shed need to get by....

I was trumped! The question - vaguely based on my own - won the prize! At least it was only a tatty and dog-eared copy of the Four To Doomesday Target novelisation!!!
Posted by Steven Ricks Tailoring at 11:29