Earlier this month saw the release by Forbidden Planet of a couple of comical t-shirts based on the costumes of the Fourth and Fifth Doctors. 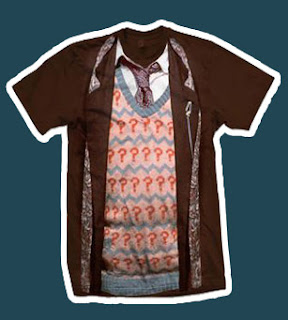 Well, they seem to have been popular as next month they are issuing two more – one of the Sixth Doctor and one of the Seventh! (see left).

I’m not quite sure how they produced the shirts, but they seem to have been imaged from either original photographs or from access to the original costumes, and are very screen accurate!

The other shirts are still available (see below) and they make for quite an amusing collection.

Posted by Steven Ricks Tailoring at 17:53 No comments: