Today I took yet another trip to Barking Library for the 10th Planet Events signing session.

Over the past few months the guest list has been slowly expanding to quite a lineup, only for it to shrink back down.
In the weeks prior to the event Nigel Betts, Wendy Padbury and daughter Charlie Hayes as well as Carmen Munroe have all had to cancel. In the end even Sharon Duce, who was scheduled to attend, failed to show up! Maybe they’ll rebook them for future events so we’ll get to meet them.

Last minute additions who did then show were David Bailie and Nicholas Parsons no less!

NICHOLAS PARSONS played Reverend Wainwright in The Curse of Fenric.
Best known for hosting Sale of the Century and Just A Minute, he was awarded a CBE in the 2014 New Year Honours List. 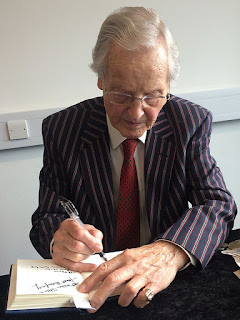 I was struck by how frail Nicholas seemed when I was getting my book signed. He didn’t appear how he comes across when you listen to him on Just a Minute. then again, he is 91, so it is fantastic he remains active and engaged.

Amusingly, given that he played a vicar in Doctor Who, he remarked that my River Song diary looked like a prayer book! When I pointed out it’s cover is like the TARDIS, he got the reference.

DAVID BAILIE played Dask in The Robots of Death and later played the Celestial Toymaker in the Big Finish Productions audios. Outside of Who he is well known for playing Cotton in the Pirates of the Caribbean series. 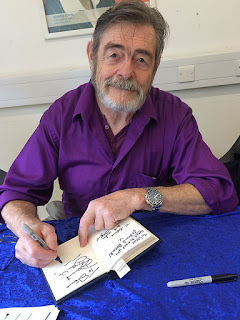 I had a nice little chat with David and I asked him a little about being in Robots Of Death and the weird face-paint make-up. 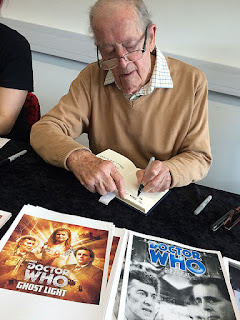 Like Nicholas  John Nettleton also played a vicar in a McCoy era adventure.

It’s like they had a thing for vicars that year! 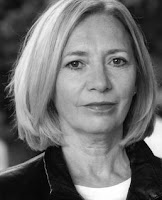 After waiting around for ages, and the organisers sending scouts out to find her, Sharon was a big no-show for this event.
Let’s hope she just got lost rather than intentional didn’t bother to come.

TREVOR MARTIN played a Time Lord in The War Games and an alternative Fourth Doctor in Doctor Who and the Daleks in Seven Keys to Doomsday. He also provided the voices for several characters in the BBC Radio audio story The Paradise of Death and for Professor Capra in the Big Finish Productions audio story Flip-Flop.

I met Trevor at The Day Of The Doctors back in March, so I didn’t need to get his autograph today.

ROBERT ASHBY played the Borad in the Doctor Who story Timelash. 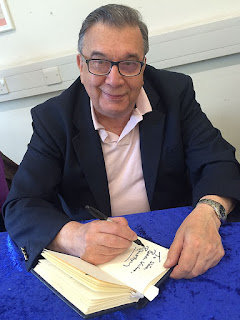 Robert was something of a dark horse when it came to his panel discussion. He revealed that during her time on Doctor Who, Lousie Jameson was his partner, so he would have to sit through the episodes when they were shown, and he’s get set-reports of the goings on behind the scenes!

PETER ROY is a British extra who has appeared in several eras of Doctor Who, from the 1960s to the 1980s. He has appeared in James Bond movies, Superman IV and even being a part of the Harry Potter Franchise. 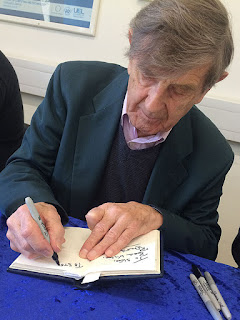 Peter is one of those seasoned jobbing background artists that you’ve probably seen in a hundred films, but never noticed.

He explained how owning a police uniform got him most of his work, resulting in over 1,000 film appearances! 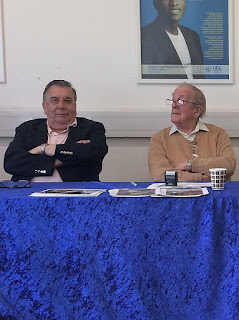 Once the panel discussion kicked of, Nicholas became the more out-going persona we know from Just A Minute.
he recalled being in costume on location and a member of the public coming up to him to ask about booking the church hall for a event, before realising he wasn’t the right vicar!

Robert told us how he was up for the part of Avon, losing out to Paul Darrow - who he then appeared with in Doctor Who.
He also told us how he lost a lot of weight due to the awkward facial mask-up he wore for his appearance in Timelash. Covering only half his face it made eating very difficult. 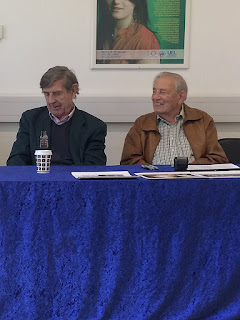 Trevor had vivid recollections of preparing for the Doctor Who stage play. With such a challenging production the technical run-through dragged on for almost a week, compared to one or two days for a more conventional production.
Ultimately the run was cut short due to IRA bombs going off on The Strand close to their theatre. Audiences stayed away from the West End, and the play closed.
Very sad.
Posted by Steven Ricks Tailoring at 19:42 No comments: