I’ve been researching the Entertainment Memorabilia auctions at Bonhams, and it was EXACTLY 10 years ago today that Tom’s scarf, last worn in Shada, was sold along with a number of other classic series items.

Here’s what was on offer.

As usual I have separated the items by Doctor era, and you can see the rest of the items here: 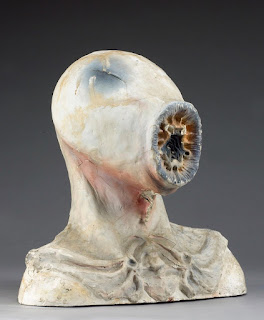 Lot 626
Presentation items,
comprising a pottery model church on wood base with plaque reading Presented To John Natahn-Turner For 'The Curse Of Fenric'. Season Poll Winner; a tankard marked Producer Doctor Who; and a fan-made workbox embroidered Doctor Who All Creatures Great And Small John Nathan Tuner Cinderella Pantomine BBC
FOOTNOTES
The Curse Of Fenric was broadcast October 1989.
Estimate £100 - 150
Sold for £228
Posted by Steven Ricks Tailoring at 17:06