The main draw for me today was to meet two of the lead stars from the enigmatic Sylvester McCoy adventure, Ghost Light. 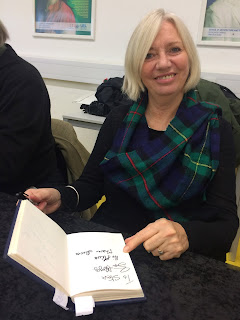 Sharon Duce was due to attend last time, but apparently got lost en route and despite repeated efforts, couldn't be found by the event organisers!

Luckily she made it today, so she was a very welcome addition to the line-up.
Sitting next to her was Ian Hogg, her co-star from Ghost Light. 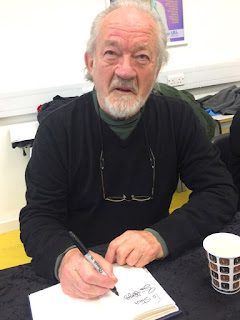 He has also been associated with Doctor Who by voicing the part of General Voshkar in The Sandman, a spin-off Doctor Who audio drama produced in 2002 by Big Finish Productions.

Next to them in line was Jon Davey, an extra who has so far appeared in 35 episodes of Doctor Who, as a variety of monsters and small featured parts.

JON DAVEY has played a variety of monsters in Doctor Who. These include Cybermen, Daleks, Ood, Jadoon, Hath, Heavenly Host, Vigil and Wispermen. He has performed live at may events including The Doctor Who Proms and Doctor Who Live and Doctor Who Symphonic Spectacular in Australia and New Zealand. 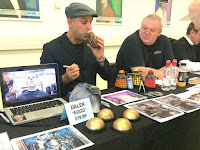 He was a real nice chap, but frankly suffers from the self-importance syndrome that a lot of film and tv extra stuff from.

He is full of (interesting) stories of how its him in that Cybermen costume with one arm; or the Dalek at the back that has the exploding eye-stalk; or the Ood that stands up and touched Rose's shoulder - all well and good, but someone had to be in the costume, unfortunately it was him.

Unlike the rest of the guests, Jon had pretty much filled his allotted space with a shop selling signed Dalek toys (£20), signed Dalek eggs (£19.99 - is the penny difference worth the hassle?) and even an audio-visual display of him being put into make-up from a Doctor Who Confidential episode. 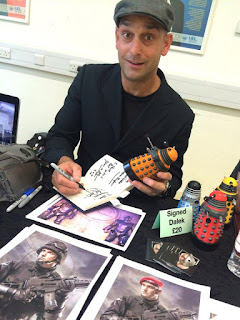 Like I do with every guest I asked for a quick shot of him signing my book, which he insisted on doing clutching one of the toy Daleks to 'Make and event of it'. Succeed.

FRAZER HINES
Frazer Hines played companion Jamie McCrimmon from The Highlanders to The War Games, and again in the twentieth anniversary special, The Five Doctors, and the Season 22 story, The Two Doctors. Outside Doctor Who, he is perhaps best known for playing Joe Sugden in Emmerdale Farm.

DICK MILLS is a British sound engineer who provided special sounds for Doctor Who from 1972 to 1989. He is responsible for the frequently-used Cloister Bell sound. 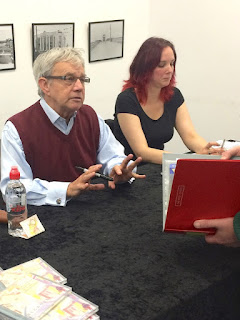 I already have Dick Mills and Frazer Hines in my book from previous events, so I didn't need them, but I did need Catherine Howe who has been on everyone's radar recently due to the release of The Underwater Menace on DVD. 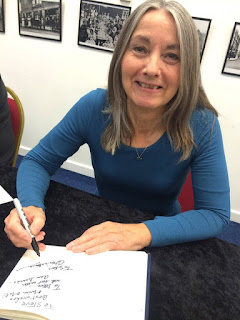 She was sitting next to Frazer for the signing, and they were exchanging stories about their time shooting the story, nearly 50 years ago now!

RALPH WATSON appeared in four Doctor Who serials alongside three Doctors, with Patrick Troughton twice. He played an uncredited Generator Scientist in The Underwater Menace, Captain Knight in The Web of Fear, Ettis in The Monster of Peladon and Ben in Horror of Fang Rock. 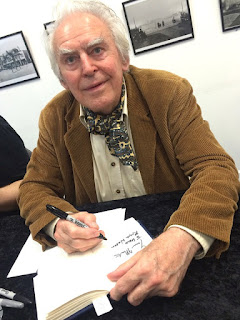 Her co-star, Ralph Watson was also in attendance, and he was more than happy to sign my book and pose for a photo for me.


Completing the line up was Gregory De Polnay who appeared in Robots Of Death.

GREGORY DE POLNAY played D84 in The Robots of Death. He later voiced Voc 23 in the Kaldor City audio Storm Mine. 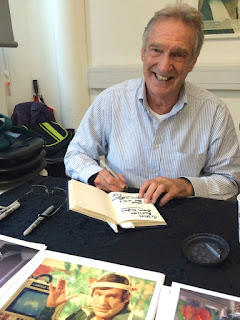 After meeting David Bailie last time, it was nice to meet another member of the cast.


Once everyone had got the autographs they wanted, and the professional photos with the guests, it was time for a question an answer session, hosted as usual by Robert Dick.

Dick Mills remembered working on Doctor Who before any film was shot. Alongside Delia Derbyshire, he acted as technician to her creative mind in creating the iconic opening music.

Each episode had a 10 day turn around from first viewing to final dub, which he explained was fine for episode 1, but by episode 23 they were flagging! 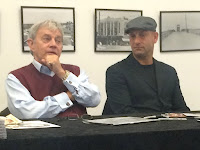 Frazer talked enthusiastically about recovering the lost episode. He'd love to see The Highlanders and Evil Of The Daleks recovered, but realises the chances are slim.

Catherine remembered she was very young when she was on Doctor Who and talk fondly of Aneka.

Ralph also recalled the episode, but thought everyone had been quite cruel to the director, who was a Polish Jew who had fled Germany prior to WW2. Patrick Troughton and Julia Smith classed with him a lot, which was sad as he was doing a good job. 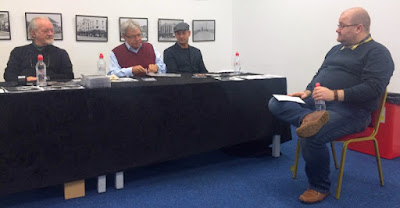 Jon joined Who during series two, when he attend an open audition along with around 50 others. After passing the 'marching in a straight line with your eyes closed' test, he went to Millennium Effects where he discovered he was shortlisted to be a Cyberman. The final criteria was to fit the costume, which he did, so got the part.
A colleague one day brought in some bathroom scales to weigh himself in costume, subtracted his body weight, to work out the costume weighed 4 stone!
The mouth had LED lights inside, so restricted breathing, meaning the only airholes were through the eyes.

This reminded Dick Mills of an instant during his appearance on The One Show.

They had an old and new series Cyberman on set, but the producers thought the old one looked tatty, so they used silver gaffer tape to smooth over the wrists, elbows and around the neck. They didn't realise that all air circulation had been cut off and the actor in the costume FAINTED!

Sharon shared more scenes with Sophie than Sylvester, so her memories were more of her than him. Ian remembers having great respect for Sylvester for learning long passages of script.

Sharon acting stage manger at York repertory theatre. Following a long run of quality plays the cast were told they would be doing Stop It Nurse, a comic farce. Brought in to star was none other than Tom Baker, who she described as having came with pop-out eyes and toothbrush in top pocket.

Like much of the male cast, Gregory lusted over Louise Jameson in what little costume she had, and felt first-hand the friction between her and Tom Baker.
But he did manage to break into Tom's crossword circle when he cracked a particularly difficult Times crossword clue, after which he enjoyed a gin or two in the bar after rehearsals.

A week or so prior, Greg worked on the Space: 1999 episode The Lambda Factor as Chief Engineer Pete Garforth. 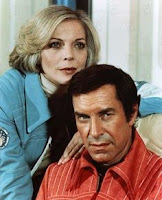 The lead stars are American husband and wife team Martin Landau and Barbara Bain. He recalled they were on £22,000 a week, with plush hotels, chauffeur driven car, silver service lunches, while the rest of the cast were on £8 a week, including the buy-out fee!

Inspired by tales of the Landau's excesses, Frazer told a tale of catch a lift to Television Centre with Eric Morecombe. Upon arrival the commissionier, who only had one arm, would each day usher Eric to a reserved space. At the end of the week he asked Eric if there was a chance of two tickets to the Christmas Show, one for himself and his wife. Eric said the wife could come, but he couldn't. Affronted, he asked why. "You can't clap!", Eric replied! 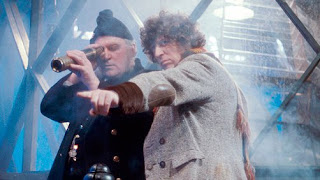 As well as starring with Patrick Troughton in The Underwater Menace, Ralph also appeared alongside Tom Baker in The Terror Of Fang Rock. Unusually this was recorded at the Pebble Mill studios in Birmingham, and he recalled Tom's barely contained rage at the change of studio, tearing him away from his beloved Soho. He remembered Louise's tipping moment when Tom went through a door onto set too quick, causing the camera to miss her entrance. Luckily Paddy Russell, the director was strong and helped patch things up.

All in all it was a good panel with lots of lively stories and discussion. Well worth seeing!
Posted by Steven Ricks Tailoring at 17:21