This weekend I had a great day out today at the Riverside Studios in Hammersmith. 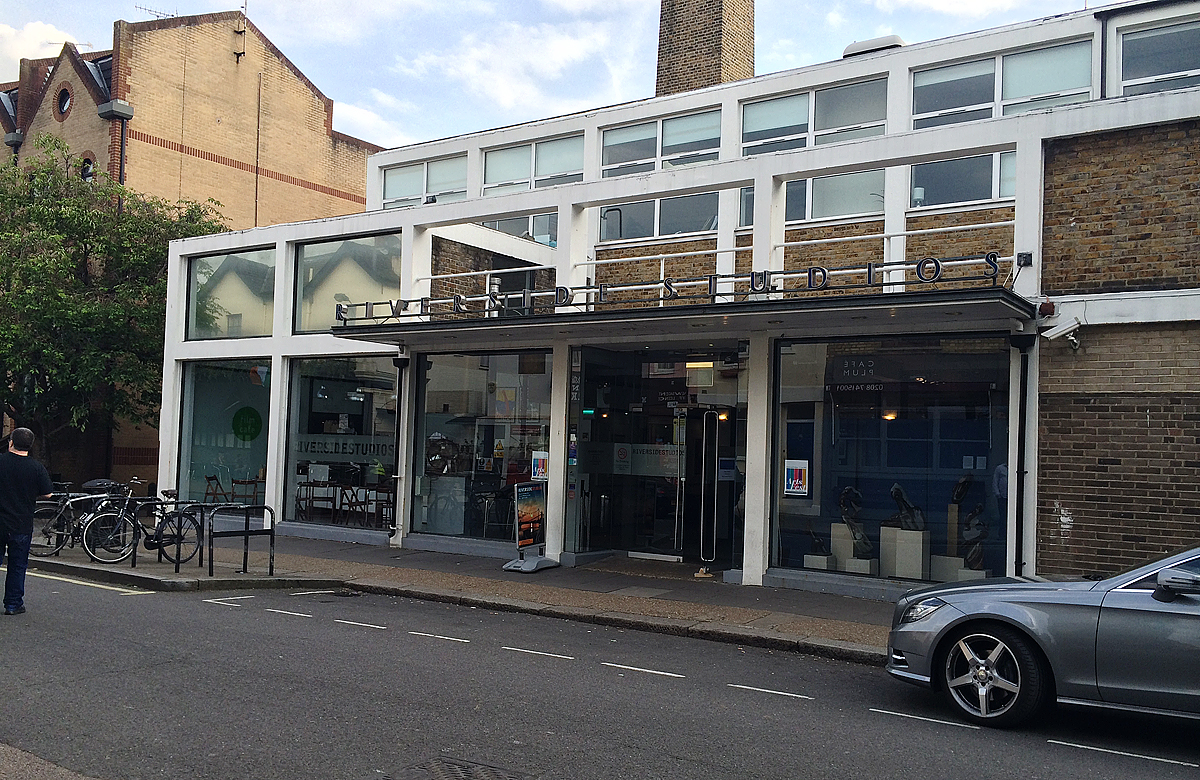 The studios are part of the history and folklore of Doctor Who, having been where The Daleks invaded Earth in 1964, and a couple of years later where William Hartnell regenerated into Patrick Troughton.

In fact the iconic scene of Dalek emerging from the Thames was filmed only yards from the studios, by Hammersmith Bridge!

Sadly the studios, currently used for Weekend Kitchen, are due to be demolished later this year, leaving only a fraction of the site still standing.

The event was organised by DWAS - The Doctor Who Appreciation Society - and was a lot more low key compared to a majority of the glossy events that are staged these days.

Don’t get me wrong - I PREFERRED this to the glossy events as it was a lot more intimate, you you got see every part of the days events and damn it, they kept to their published timetable.

The spin on the day was the production side and how the behind the scenes events shaped what we saw on screen, with a heavy bias towards the classic rather than new series.

We kicked off with a one-on-one interview with Philip Hinchcliffe, who produced the first three years of Tom Baker’s era.

PHILIP HINCHCLIFFE interview
Philip’s interview was very insightful and interesting, as he had taken over from Barry Letts to launch the Tom Baker era. Much of his first season had already been planned out for him, with the inclusion of crowd pleasing foes such as Sontarans, Cybermen and of course the Daleks.

Since Philip was only involved with the Fourth Doctor era, you can read more about his interview here:

DERRICK SHERWIN and
TERRANCE DICKS interview
Next we had a double act in the form of Derrick Sherwin and Terrance Dicks, who had been consecutive script editors spanning the latter days of Patrick Troughton and the whole of the Jon Pertwee eras. Terrance also wrote for the Tom baker era too.

Since Derrick and Terrance was only involved with Doctor Who in the 1960s and 1970s, you can read more about his interview here:

We then had a break to get the first of the autographs and photo opportunities.

I took along a River Song diary I now use for autographs, and found that there was 'no limit' on the number of items you could get signed, so long as it was within reason.

So I got Philip as well as visual effects expert Mike Tucker, composer Dominic Glynn, and script editor Andrew Cartmel.

I also grabbed a quick - and it was quick - photo op with firstly Graeme Harper, then with Terrance and Derrick together.

There was minimal queuing; the photo was printed in the time it took to pay for it; and they had emailed the digital copy I asked for within minutes (and it was the photo of me, not someone else!). The photo was frankly better quality than at many glossy events, including the official 50th celebration.

It was then back into the viewing theatre for the next one-on-one interview, with director Graeme Harper.

GRAEME HARPER interview
Graeme gave an absorbing interview about his time not only on the classic series, directing Peter Davision in Caves Of Androzani and Colin Baker in Revelation Of The Daleks, but also working on the new series where is helmed the return of the Cybermen in series two.

Since Graeme was only involved with the Fifth and Sixth Doctor eras, you can read more about his interview here:

MIKE TUCKER interview
Next up was special effects guru Mike Tucker, who is one of a select few who has worked on both the classic and new series. 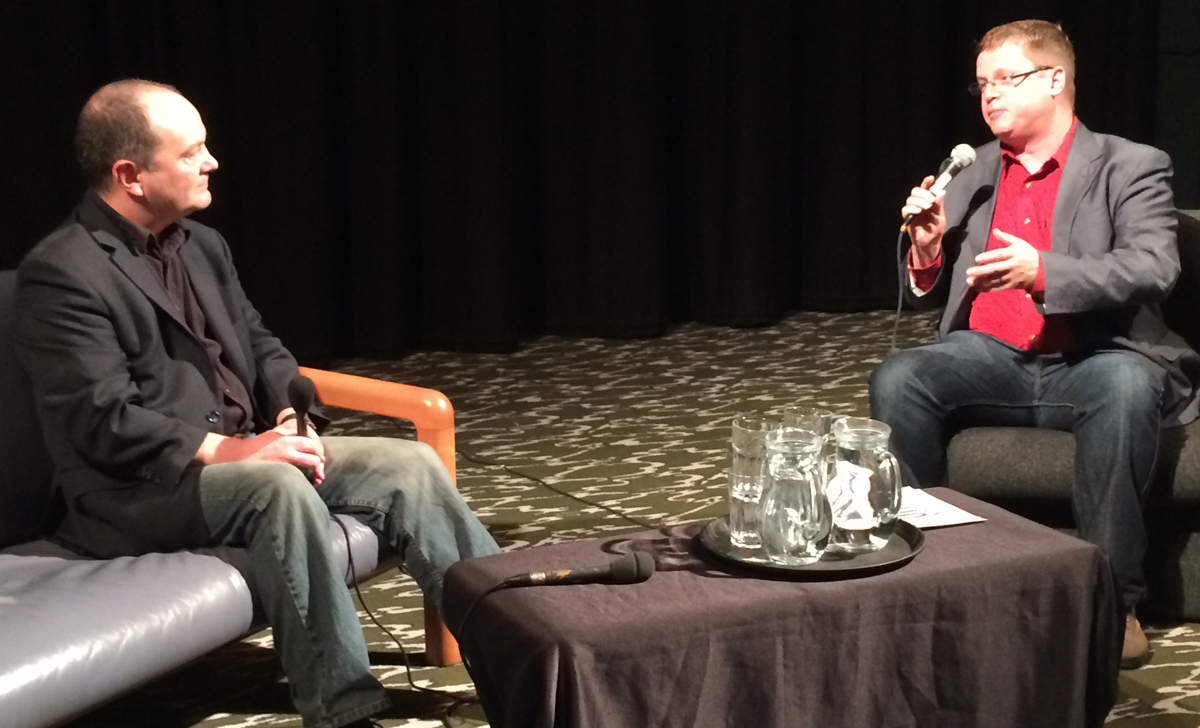 He reminisced about how as a young boy he watched Pebble Mill At One and saw a feature about the effects on Blake's Seven. Turning to his mum, he said 'I want to do that'. Suitably empowered, she wrote to the BBC and got her son an interview which led to a job in the BBC Visual Effects Department.

He talked at length about the different approaches between then and now on Doctor Who, explaining how productions were allocated by rote. This meant he did not know what he was working on week to week, but had the downside that sometimes staff who hated Doctor Who were assigned to it. He heard of staff who’s attitude was “if I do a bad job, hopefully they won't ask me again”. Which explains the sometimes patchy effects down the years.

The new series by contrast is entirely staffed by freelance workers who want to to their job to the best. Each have a limited task to perform, meaning they are more specialist in what they do. 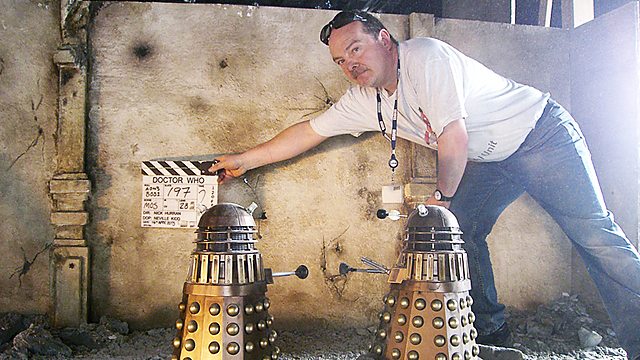 The biggest surprise for me was the revelation that until Day Of The Doctor, ALL model work had been done on film. The use of digital cameras (necessary for the 3D work) meant results were more immediate giving the opportunity to move on or shoot alternative angles on a scene. It has also resulted in shots being edited into episodes the same day as filming.

Then it was time for another break, during which I got Terrance’s autograph on my photo with him; as well as Graeme's on his photo with me and in my River Song diary.

I also had the chance to get a new photo with Colin Baker, who admired my Matt Smith costume.

Colin seems to know me pretty well now, as he pipped up, “Here comes the tailor!” when I stepped up for the shot.

Back in the viewing theatre we were treated to a double act of Dominic Glynn and Andrew Cartmel who sparked well off each other.

DOMINIC GLYNN and
ANDREW CARTMEL interview
Both had been relatively young when they worked on Doctor Who, and they had similar stories of unsolicited approaches to JNT to get their jobs. 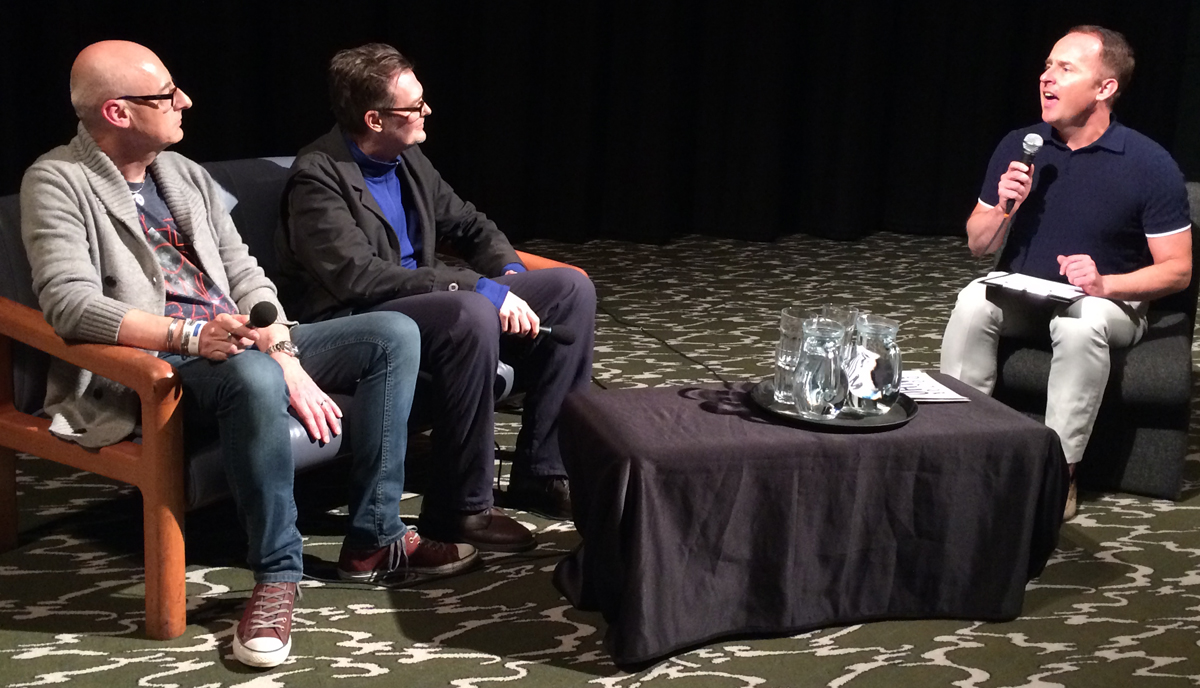 Dominic sent a demo tape to JNT, which seemed to land on his desk at just the right time. After a chat and a meeting he was hired and was writing music for Doctor Who.

Similarly Andrew managed to get a meeting with JNT and was also hired with seemingly little effort.

Both were pretty much left to do their jobs with minimal interference from JNT. He did put his foot down once in a while, but was happier to nurture talent and let it bloom.

The final interview of the day was with Colin Baker, who was on good form.

COLIN BAKER interview
He talked at length about his pre and post Doctor Who fame and looked back on his time with sometimes mixed emotions.

You can read about Colin’s interview here:

With the main programme over, it just remained to get Nicholas Briggs to scribble in my River Song diary and for Colin to sign the photo I had with him, as well as two shots from meeting him in LA earlier this year at Gallifrey One.

This was the first DWAS event I have actually been to, and I must say it was very well planned and executed.
Posted by Steven Ricks Tailoring at 17:54