I’ve been keeping an eye on eBay for original costume and props items which pop up from time to time (so you don’t have to!)

Recently I spotted a couple of items relating to the Seventh Doctor’s companion, Ace.

Here’s what I found. 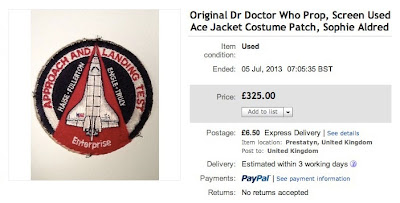 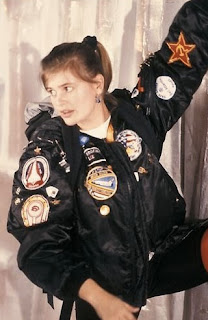 An original patch used on one of the jacket worn by Sophie Aldred as Ace.

The patch features a NASA shuttle and can clearly be seen on the Aces right shoulder.

This patch came directly from John Nathan Turner as he kept various patches from jackets that had been professionally cleaned after scenes such as when Ace falls into the river in Silver Nemesis, the jackets had to be striped of their patches/badges for cleaning and badges/patches would quite often be replaced with new ones, John kept the badges in a small box and would often sell them at the various Longleat auctions during the 1990's 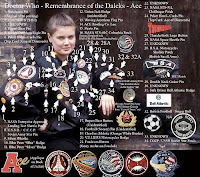 If you look closely at the image you can see were the patch was tacked to the jacket.

The Curse of Fenric Shoes worn by Ace

Welcome to possibly the oddest item i've ever auctioned!

A Pair of size 5 shoes worn by the Character "Ace" - as played by actress Sophie Aldred, in the 1989 Doctor Who serial The Curse of Fenric. 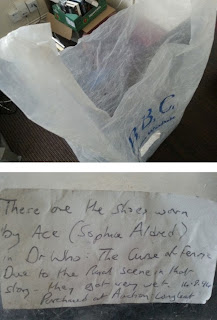 Longleat held a Doctor Who event on 14th August 1994. There was an auction of Doctor Who props by ex-producer John Nathan Turner and members of the production team. I was determind to buy something from the show, but had very little money at the time, so i ended up with these.

They can be seen on the show and in particular the end scene where Ace jumps into the sea.

CONDITION - Well preserved - they have been in the sea! They have been left exactly as i bought them. There is no smell to them. They can be easily cleaned-up with a soft cloth and polish, and possibly worn if you have have a mind to.