It’s nearly December, and that means yet another Bonhams Entertainment Memorabilia sale.

As usual Doctor Who gets a look in, with a range of eras represented, including a stunningly colourful poster for the second Peter Cushing Dalek film, Daleks Invasion Earth 2150AD.

But the main items on offer cover the now finished spin-off series, Torchwood and Sarah Jane Adventures. Since both these series had the bulk of their runs alongside the Tennant era, I have listed them in my Coat blog.

Here is the only two items from the McCoy era.


Bonhams sale 1793
(12th December 2012)
Entertainment Memorabilia
As usual I have separated the items by Doctor era, and you can see the rest of the items here: 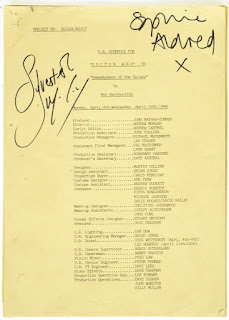 Lot 146
Doctor Who - Remembrance Of The Daleks: An autographed Outside Broadcasting Schedule for 4th-13th April 1988, front cover signed by Sylvester McCoy and Sophie Aldred, with 38 numbered pages detailing locations, cast and crew instructions
Estimate: £250 - 300
Sold for £187

Footnotes
A statement with this lot confirms it was bought from an auction on 4th September 1993 at the Panopticon 'Doctor Who Convention'. Sylvester McCoy signed it at 'Collectormania', June 2012 and Sophie Aldred at a 10th Planet signing. 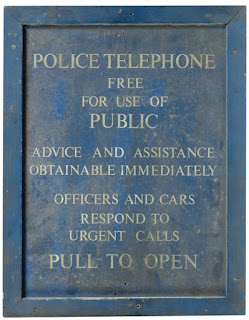 Footnotes
According to information from the vendor, this was supplied by the BBC to CAL, the company that animated the 'Doctor Who' title sequence for the 24th Series in 1987. Oliver Elms, the BBC graphics designer who story-boarded the sequence, sent the Tardis panel to CAL to be used as part of the design process. From the livery and typeface, this is a 1980s-style door sign.
Posted by Steven Ricks Tailoring at 09:56