My good friend Bob Mitsch in the US has announced Costume Station Zero - a free podcast dedicated to all things cosplay - launching today,  thirteen years to the day since the moon was torn out of Earth orbit in the classic 1960s series Space: 1999!

Although not strictly limited to Doctor Who, with Bob’s fascination for the series it will inevitably have a heavy Who orientation.

Already a couple of episodes have been posted, and the current download has some Doctor Who content. 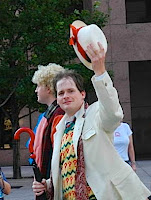 This is a chat with Seventh Doctor mega-fan Andy Teal, founder of www.prydoacademy.com and organizer for the Doctor Who Cosplayers at Dragon Con. He and Bob talk about the Dragon Con event and get into the details of the 7th Doctor’s costume.

Posted by Steven Ricks Tailoring at 09:02