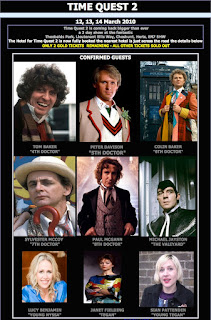 Well today marks the first day of what, for me, will be a 4-day Who event.

This weekend is Time Quest 2, an event organised by 10th Planet, and taking place in Cheshunt, Hertfordshire.

Well it wasn’t on my radar, but a good friend in the US, Bob Mitsch is coming over to attend. His motivation, since he has never been outside America (bar a trip to Mexico) is that all five surviving classic series Doctors are attending (though sadly not all on the same days).

He has always wanted to meet Tom Baker, as Bob is well know – no, renowned – for his season 12 Tom Baker outfit.
Being the consumate cosplay dresser, his plan is to have photo-calls with each actor while in an approriate costume.

This has proved to be a nightmare of logistics to plan and organise, since his luggage allowance for his trip is limited.
As a result, plans were changed; new plans arranged; some things ran right down to the wire; and some best laid plans went a little array.

The Five Coat (see left) I have been making was spruned into action on the back of a commission to make Bob some Five Trousers.
He asked if I would take on making the coat as he wanted it for Gallifrey One in Feb 2010.
With plenty of time to spare I set about cutting the patten while Bob researched the beige gaberdine needed to make it.
It all took a little longer than we both thought, as the pattern was a challenge and the gaberdine proved elusive.
Nonetheless we got there in the end and it was ready for Gallifrey One as planned, however, Bob worked out the cost of me shipping it to him and then him bringing it back to the UK for Time Quest was going to cost him a fortune, as well as excess baggage. So I held it here for him and will present it to him at the event, before taking it back and FedEx'ing it over to the US later.

Next to sort out was some items for Bob to get signed by The Doctors. Various posters and vintage copies of the Radio Times  (see right) started arriving at my door, since there was no point them doing the round trip either. 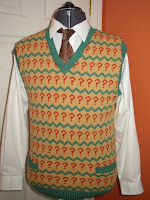 Up next were the McCoy pullovers (see left) which were part of a group run Bob had been organising for nearly two years.
Bob was despatate to have one to wear for the event, as well as, let’s face it, show off to Sylvester. The run was only part complete and officially could only ship to one address - in the US - and only when they were all done. But after a bit of pleading and pointing out the delays that had occurred, they agreed to ship a handful to me so I could pass them to Bob, plus a couple of people on the run who were also going to be there. They arrived with a few days to spare and have already recieved favouable comments from the pictures posted so far.

Finally Bob arranged to have his hats sent to me, by what he thought was a guarateed service. Sadly, as of today (two days before the event) they still have not arrived, caught apparently in customs for at least the past week.
Oh dear.

As well as taking delivery of all these props and bits, I took pity on Bob and agreed to meet him off his flight at Heathrow.
As I mentioned before, he has never ventured out of North America, and obviously had no knowledge of what to expect when he got here. He had researched tickets on the net and knew of Oyster Cards and The Tube, but I could see he needed some help.

While here Bob also wanted to make as good use of his stay as possible, and wanted to take on some Who-related locations around London. All he needed was someone with some local knowledge, an interest in Doctor Who and might be free to plan a route and take him round......

I wonder who might be up for doing that?
Posted by Steven Ricks Tailoring at 21:36