Hat Bandana - how to wear it

I have been asked by a couple of people how to wear the Hat Bandana to be as screen-accurate as possible.

The best advise is to fold it in half (diagonally) so that you have a  large triangle (see below).

Then starting with the longest (diagonal) edge, roll it up (see below).

Finally tie the hanky around your hat with a reef knot (see below). 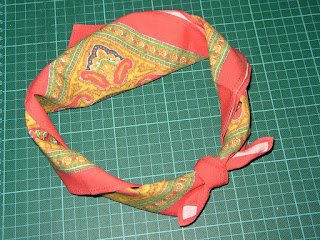 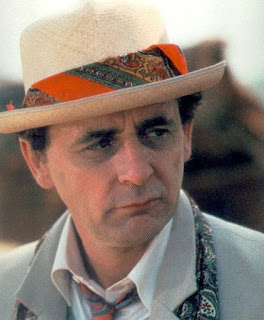 This should give a finished result looking like the picture (see left).


Having said that, I did have a email from one of my buyers who is a bit of an expert when it come to the McCoy costume.

Andy is the Founding Administrator of Prydon Academy, and here is his input into how the hanky had been used in the series back in 1989.


The hatband itself wasn’t actually a handkerchief, it was a large square scarf. It was about twice the size of a handkerchief, then they cut it in half, and used half for his hatband and half for the hanky in his lower coat pocket. I don’t know if Spoonflower can reproduce the fabric exactly, but it was woven from an extremely soft material, I want to say cotton, so it had a fully matte finish. Finally, being a scarf, it wasn’t edged like a handkerchief... the edges, I believe, were left without a seam, showing about 1/4" of unwoven thread on each side.

I know you mentioned there are limitations with Spoonflower, but hopefully this will help to get the most accurate copy they can produce.

This did give me a moment’s dilemma as to if I should make them strictly screen-accurate (ie. un-hemmed and cut in half!), or make it ‘as purchased’ by the BBC costume department, and leave it to owners to make the alterations if wanted.
Well it was only a moment, as I think it would perplex any buyer as to why I had butchered their hanky before I sent it to them!

Rest assured, I made and sent them out trimmed, hemmed and in one piece!
Posted by Steven Ricks Tailoring at 15:29